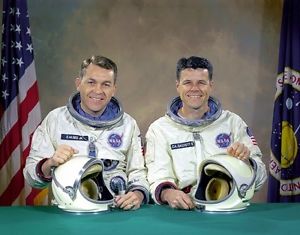 Gemini 9 coming down the line, not now but soon in the fast and furious pace of the program, scheduled for a May launch.  At the start of February 1966, with Tom Stafford released from Gemini 6A post-flight work, the crews finally begin training together, the prime crew consisting of Elliot M. See, Jr., command pilot, with Charles A. Bassett II as pilot.  We’re on the backup crew, shadowing them throughout training for a three-day flight of intensive rendezvous practice.  Three rendezvous with an Agena target, the first on orbit 3 simulating an Apollo Lunar Module (LM) returning to the orbital mother ship, the second a rendezvous from above, then a simulated LM abort.  All that and more.  Charlie Bassett will test fly the Air Force’s Astronaut Maneuvering Unit (AMU) backpack during a spacewalk.

On the morning of February 28, 1966, the four of us gather at Ellington AFB, two Northrup T-38 two-seater jets on the tarmac waiting for us under mostly clear skies.  We’re head for McDonnell Aircraft, builders of the Gemini, in St. Louis for a few days training in their rendezvous simulator.

It’s only the beginning of everything for Charlie Bassett.  He’s already been tapped by Chief Astronaut Deke Slayton for much more.  After Gemini 9, he will move into a slot on Frank Borman’s Apollo crew.  Charlie Bassett is going to the moon.

Shortly before 9 a.m., we approach the airport, Lambert Field, McDonnell’s plant is located just to the side of the runways, although we can’t see it.  We’re flying on instruments through a soup of clouds, See and Bassett in the lead and us as wingman just to their right.  We’re following them down through a fog.  See calls that he has the green runway boundary light in sight, “Wheels down.”  We follow his lead, pop under the clouds to find that we’re fast and too far along the runway.  Without warning, See pivots in a sharp left turn.   It happens like that, a snap decision.  He’s made the wrong choice, deciding to try to circle low keeping the runway in sight and land.  We lose sight of him, still turning, low.  Too low.  We execute a “missed approach,” climbing and circling back out for another instrumented descent to the runway.   But we get a call from the tower to stay in a holding pattern.

When we finally land, we are greeted by a glum-faced group of McDonnell officials.  See had continued turning left, trying to line up with the runway.  But he was too low and perhaps didn’t see McDonnell Building 101 in the fog, the flat-roofed building in which his Gemini was being prepared for shipment to the Cape.  He was headed straight for it.  Hitting his afterburner, he attempted to climb.  Too late.  NASA 901 pancaked onto the asphalt roof of the building, slid across it, cartwheeling into a parking lot, exploding.  Instantly killing See and Bassett.