Skip to content
Posted on January 28, 2016 by etiptree Posted in SpaceTagged Space 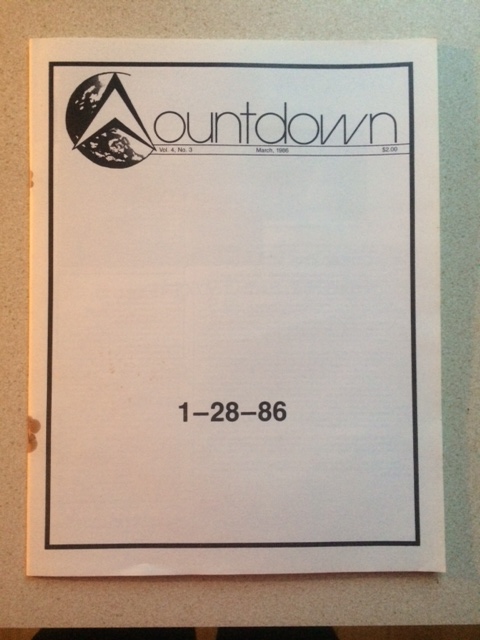 Although the mission was barely a minute old, CNN’s Tom Minter was summing up the successful launch, milliseconds from signing off the air.  My mind, too, was turning away, beginning to calculate the time I needed to set aside to cover the flight for a small magazine.

In those milliseconds, I took the last breath of the second era of the space program, although I wouldn’t know it for another two years.  Mercury/Gemini/Apollo comprised the creation myth, the Old Testament.  Reaching the moon.  Then the fall from the moon.  The Space Shuttle was writing the New Testament, I thought.   It appeared smote by fate, CNN reporting that what happened seemed sudden, instantaneous.  “An unforeseen tragedy.”

Today the common perception is that the Shuttle was designed to build the space station.  It was and it wasn’t.  It was designed to be all things to all people, including having the capacity to build a space station.  It would be to space exploration what the DC-3 was to aviation, its payload bay large enough to carry a plethora of proposals for opening up the space frontier to routine access.  Vistas of space manufacturing, commercialization.  Ideas for space tourism, turning its payload bay into a passenger cabin.  Hopes to return to the moon.  Plans to build giant solar power satellites beaming power to earth.   Grand visions of space colonies, the L5 Society formed to promote the ideas of Gerard K. O’Neil to build them at the gravitationally stable Lagrangian Points. Who remembers the slogan “L5 by ’95”– ?  They were talking about 1995 not 2095.

The Space Shuttle was designed to carry dreams.  Indeed, “the dream is still alive” became NASA’s theme for the 1988 return to flight.  Only the devil’s horns of the smoke trails from Challenger’s Solid Rocket Boosters divided Shuttle observers into doubters and true believers.  I became a doubter that the Shuttle could deliver the dream.  Believing that the system was too costly and fragile.  That another tragedy would occur.

Today, I find myself returning to the religion of my youth, carried on new vehicles.  The Mars rovers providing a new view of a world that once held oceans.  New Horizons delivering us Pluto.  Cassini continuing to explore Saturn.  The exploits of SpaceX and the other private firms.  The potential of NASA’s Orion capsule for voyages beyond the confines of Earth orbit.  Once again, as I approach old age, space beckons.