Skip to content
Posted on May 26, 2019 by etiptree Posted in Poetry, Space, UncategorizedTagged Space 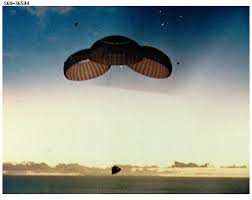 We return just after dawn

We fall softly through in the warm Pacific dawn,

Stable one — we come down true.

A low but lifting yellow-orange sunlight in our eyes,

captures us in the moment.

home with a vision of the moon

rather than Apollo 8’s cold grays.

We showed our mission to the world

in color, pushing to include a Westinghouse camera

in the spacecraft ten days before launch.

We are the first crew to show actual mission events,

transposition and docking with the lunar module

after launch, undocking of the LM in lunar orbit,

seventeen broadcasts during the mission,

allowing the world to journey with us.

stepping on the carrier deck of the Princeton,

In the golden light of sunrise, faces aglow,

the last step before the first step

In Apollo and as in life, you’re either

Stable one or stable two.

We’re all creatures of the moon.