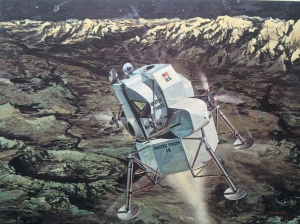 Accelerate the program, a flight every eight-to-ten weeks.

Through he drone of checklists and flight plans, it appears all polished and perfected. Solid, an logical, inevitable progression.

Yet often Gemini is improvised, changing until the moment of launch. Expanded in the enthusiasm of the moment, hubris, not an exact science. Take Gemini 4. Primary objective: Four days in space, the limit of battery power can sustain. The mission will conduct eleven experiments, mostly photography and radiation measurements. For more than a year, the possibilities is held open of a form of precursor EVA called SEVA, Stand-up ExtraVehicular Activity. The pilot would crack open the hatch and stand up. That’s all.

Now we’re going to catch and surpass the Russian, Alexi Leonov, and his 10-minute spacewalk. Just nine days before launch, final approval comes: a full spacewalk on orbit 2 for 20 minutes.

In addition, another last-minute improvisation arises. Call it a mini-rendezvous from short range, or the Navy term, station, keeping, maintaining close formation with another ship. On the first orbit, we will attempt to close within 20 feet of the spend second stage of the Titan rocket. If all goes well, the spacewalking pilot will attempt to float over to it, propelling himself with a ‘space gun.’ The Hand-Held Maneuvering Unit uses spurts of oxygen to propel the spacewalker.

A bold plan to carry out in the first hours of a flight.

‘We’re right on the money, the Capcom calls.

SECO. Sep., and I fire a 12-sec. burst to move out. Turnaround, and there’s the booster’s second stage, a 19-foot-long silver cylinder, 10 feet in diameter. A stubby thing, training a long engine nozzle still spewing leftover propellant. I’ve drifted farther out than I would have liked, maybe 400 feet, the booster dropping below me, slowly tumbling.

I fire my thrusters, two bursts, to close the gap. Oddly, the Titan stage appears to move down and away.

A strange world up here. I keep gunning toward the tumbling rocket and it keeps falling away. Into the nightside, it appears about 2,000 feet away. I have no way of knowing for sure, having no radar to give range and rates of movement. I keep burning for the thing. Maybe close the distance by half or even more. But coming into daylight, the Titan appears about three miles behind me.

At the end of the first orbit, I tell Guaymas, ‘We still ahve the booster, we’re quite a ways off from it now. Err, it’s taking a little more fuel than we anticipated. Do you want to make a major effort to close with this thing or to save the fuel.

Immediately diving into EVA prep, the cramped cockpit filling with equipment, the snaking oxygen hose, emergency oxygen chestpack, HHMU gun, and cameras. Trying to fit everything together through a checklist running with nearly 75 items. ‘We don’t have time,’ I tell the ground. ‘We’ll wait until the next pass around.’

We start the checklist from the beginning again, aiming for a third orbit EVA. The one-orbit delay clocked one consequence. Daylight. Houston wanted the spacewalker back inside before orbital darkness, which would now come sooner on the pass, over Burmuda.

We’re ready early, passing over the Indian Ocean. ‘It’s go for EVA.’ The cabin is depressurized, slowly bleeding to vacuum, taking until Hawaii. Not waiting until the planned exit point over Guaymus, Houston says, ‘Tell him we’re ready to have him get out when he is.’ The early exit will yield 6 minutes additional daylight time.

At first as I turn a ratchet handle, the hatch remains stuck. Then it gives, and jumps open a few inches; I grab it to keep it flinging open. Our suits are outgassing a bit of air, which forced the hatch to pop.

I stand up and work at the open hatch for 12 minutes, installing a movie camera. Hard work, I’m beginning to sweat.

‘OK, I’m separating from the spacecraft.’ I give a blip of my gun. ‘OK, my feet are out.’ I move down the nose of the Gemini, pointed down at the Earth. Drifting higher than I want and a bit to one side. I turn towards the command pilot’s window and give a salute. Feeling no disorientation.

I jet back toward the spacecraft. A tug on the tether swings me over the top of the crew cabin, back towards the white adapter section studded with thrusters. I move back out front and use the gun to stop on a dime in front of the nose. I try a couple yaw and pitch maneuvers, a spacecraft in my own right, finding control excellent. But just 4 minutes into the spacewalk, the gun’s tiny fuel supply runs out. ‘It was very easy to maneuver with the gun; the only problem I have is I haven’t enough fuel. This is the greatest experience; it’s just tremendous.’

‘I can sit out here and see the whole California coast.’

From inside, ‘Hey, you smeared my windshield, you dirty dog.’

With our intercom keyed, we cannot hear Houston. Finally we ask them, ‘Do you have any messages for us?’

Houston is concerned because we’re approaching darkness. I laugh, ‘I’m not coming in… This is fun.’

My partner calls, ‘Back in. Come on.’

‘Don’t wear yourself out now, jut come in.’

I’m still riding a wave of exhilaration, joking, ‘Aren’t you going to hold my hand?’

‘I’m fixing to come in the house. This is the saddest moment of my life.’

The task proves difficult, eating time, disassembling the camera, cramming and curving down into the tight cockpit, jamming my feet into the narrow foot well. And then there’s the hatch. It’s difficult to bring down. My partner has to hold onto my legs as I tug on it. Finally down. He holds it tight, tugging on a lanyard, while I attempt to latch it. The ratchet spins uselessly. Our extensive training comes to good use, having taken a latch mechanism apart. I work the gears by hand, inching them along until the hatch seals.

It’s nearly an orbit before pressure is brought back up. ‘And we’ve got three-and-a-half more days to go, buddy.’

With fuel low, we drift for 30 hours, taking photos when the view permits. We try to alternate sleep periods so that one of us is always on watch. This proves impossible in the shoulder-to-shoulder confines. It’s hard enough sleeping in our spacesuits, helmets on.

During orbit 22, Houston congratulates us on passing the American duration record. We reply, ‘Roger. We’ve got a quite a few more to go.’

The accumulation of trash becomes the biggest problem. All those empty food bags, in addition to all the EVA hardware. No place to put it, keep shoving it down the foot well.

After 42 hours, we’re given a go to use our thrusters ‘sparingly.’ At 68 hours, we can resume using them for the full experiment load. We take more than 200 cloud formation photos, a hundred for terrain studies. We confirm reports from Mercury astronaut Gordo Cooper that from orbit, the eye can see fine details such as roads and wakes of ships. Twice we see the shimmering curtain of the aurora, the first astronauts to do so.

On our third day, 76 hours into the flight, our Gemini suffers its one major failure. After we’ve updated the computer, it won’t turn off, won’t respond to commands.

‘Why don’t you just kick it,’ Houston jokes.

Without the computer, we can’t making a controlled, lifting re-entry. We have to come down like a Mercury capsule, rifling through the atmosphere on a ballistic arc. The rolling re-entry subjects us to 8 gs, nearly twice the load as on Gemini 3’s lifting re-entry.

We splashdown hard, a big jolt in the waves.

Doctors. Their job involves devising dire theories on the effects of prolonged weightlessness. They worry that the strain on the circulation system will cause us to pass out. Perhaps even go into cardiac arrest.

Once out of that bobbing capsule, we feel fine. No vertigo, or even a touch of lightheadedness. We’ve opened the way to long duration flights.